For all that my recent visit to the Jeremy Deller exhibition at the William Morris Gallery has to be counted something of a disappointment, let it not be thought my journey to the furthest reaches of Walthamstow was wasted. For there, behind the gallery, resplendent in early Spring sunshine and calling to me, as it were, was the newly redeveloped Lloyd Park.

Infiltrating myself between the mums-and-buggies crowding out the gallery tea room, I quickly  purchased a pre-wrapped sandwich and bottle of water and headed down to the park  in search of an empty bench. More mums; more buggies; more small children than you could shake a stick at.  (A strange idiom, but, in this context, perhaps appropriate.) Then, just when I’d come close to giving up and entertained risking my new black jeans on the Lloyd Park grass, there, opposite the tennis courts, I spied an elderly couple slowly vacating a bench.

No sooner had they stepped away, than I had slipped into their place, divesting myself of coat, hat, scarf and shoulder bag and spreading them liberally to either side. This bench is occupied.

After a burst of hefty thwacking, the two young men on the court directly across from where I’m sitting pack up their things and go, to be replaced immediately by an almost identical pair – sun glasses, sports gear, Nike trainers, high slashing serves and wild returns. The sandwich is smoked salmon and avocado on seeded bread; not a combination I would have immediately thought of (something of a Resnick sandwich perhaps, putting on, for a moment, my other hat) but excellent and at £3.50, these days not too bad a deal. A couple more bites and I lean back and take out my book, which happens to be The Ongoing Moment, Geoff Dyer’s book on photography, which I last set aside, exiting the tube earlier that morning, at page 129.

Though it can serve as one, a bench is not a bed. Nor is it a chair. Chairs move around, congregate in different ways, reconfiguring themselves according to the demands of the social situation in which they find themselves. In their limited way they even enjoy a bit of travel – chairs on the terrace of a Paris café go inside for the night – but the bench has no inner life like this. The bench sits it out, waiting for dawn. As such, its nocturnal life is potentially more romantic than the chair’s

Yes, here I am, sitting on a bench in Lloyd Park, reading Geoff Dyer’s thoughts about a bench. The bench. Famous benches that, thanks to photography, we have known. A coincidence? Of course. And true. (You don’t, for a minute, think I make this stuff up?)

Brassai’s bench, for instance, a  solitary figure sheltering from the Riviera sun in 1936 … and it’s companion, Dyer suggests, taken by Lartigue just a few years earlier, just a short way along the coast, Renée at Eden Roc. All right, they don’t exactly share a bench, but railings, umbrellas, the same Mediterranean sun … 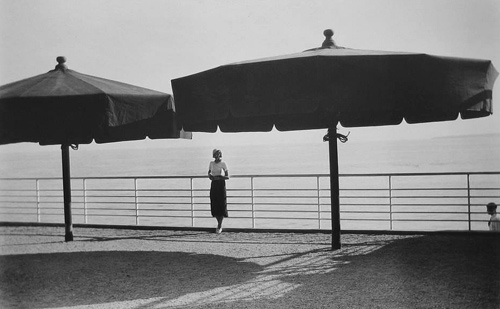 This is one of the ways in which Dyer takes us through the history of photography, not in a clinical way, nor in a manner that is a ready prey to theory, but by a tracing of image, the images that so many photographers share, sometimes in what seems like conscious nods in one another’s direction, sometimes as if unaware. The bench, the open road, the window, the car, the beggar, the musician, the naked woman, the hat.

This is André Kertesz in New York in 1962, photographing a man, a broken bench, some background.

Like so many photographs, a chance moment? What did Cartier-Bresson say? Something about the held breath, the captured moment of fleeting reality. The man, what is he doing, standing there with his hands clasped behind his back? His gaze, where is it directed? At the broken bench? The two women sitting on another bench in the background? The line of cars? The line of our vision, I think, takes us through a slight curve from front to back; a line that follows those lines already trod, the uneven line of benches to the right; the line of sight of the man, presumed from the angle of his neck, towards the first of the women, the woman in white.

We don’t know, until we are told, until Dyer tells us, that the man, a friend of Kertész, is blind; nor that the women on the bench are Kertész’s wife and the mentally unstable younger woman she has befriended. The man is seeing nothing: the scene is one that Kertész has staged. Knowing none of this, are we are tempted, nonetheless, to see the bench, in part, as metaphor? And knowing everything , knowing the truth, something of the truth, behind the photograph, does it become less of a great photograph – if that’s what it is – or more?

So many questions. So many benches. Benches in Budapest, the French Riviera, Central Park. As it sit reading, I become more and more aware that everyone – everyone, it seems – the tennis players, the couples passing by, the young woman talking excitedly into her mobile phone – is speaking in a language that may be Russian. Polish, possibly, or Russian. Some Eastern European language that evades me, as most languages do, and for a moment it would not be difficult to imagine myself somewhere else, some other bench …

But, of course, the moment passes. I finish my sandwich, close the book. Page 139, Paul Strand: White Fence, Port Kent, New York, 1916. Just time before moving on, getting off the fence, as it were, for a bench or two of my own …

Not to mention, a fence … 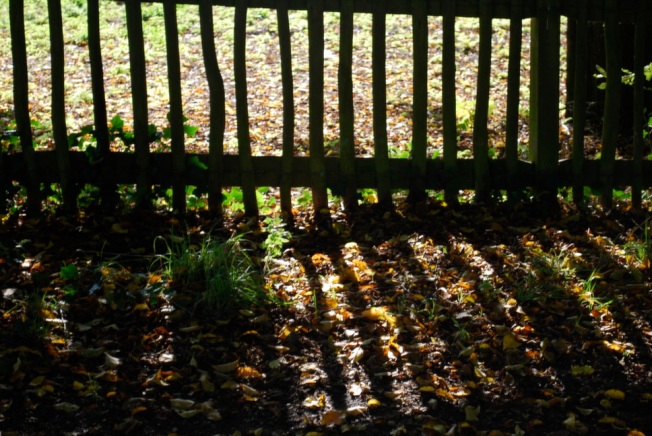 5 thoughts on “Photography: Sittin’ in the Park with Geoff Dyer (well, almost)”