I’ve been thinking about narrative lately. Partly because if you’ve still got author on your passport, you just do – from time to time, anyway – and more specifically as I’ve agreed to take part in a panel discussion at this year’s Bristol CrimeFest to be chaired by no less august a personage than the current Crime Writers’ Association chair, Alison Joseph, entitled ‘Narrative, Resolution and Crime Fiction’.

I’ve previously mentioned Geoff Dyer’s book on photography, The Ongoing Moment, and reading that alongside re-reading Middlemarch, has been interesting. George Eliot’s way of progressing the storyline, the novel being initially published in serial form, was, essentially, one of carrot and stick, carrot and stick; move one character or pair of characters just so far, bring them to what seems an impasse and leave them there while  you switch the attention elsewhere (leaving us worried about their fate, the meanwhile), then, when you return to them, find a way of moving them on another stage, each small resolution having within it a new problem to be negotiated. Do this with each major character or pair of characters and you have a multi-faceted narrative, complex and richly textured, and, at story level, satisfying.

I’m reminded of those Saturday Morning serials I used to watch as a kid: the hero or heroine left at the end of the episode in what seems to be an utterly hopeless situation; then, at the beginning of the next episode the following week, that scene is repeated with a slight difference, something that had been kept hidden is revealed, allowing the hero/heroine to be saved and the story to progress. It’s how most narrative works, I guess, Middlemarch or Eastenders and, perhaps, crime fiction most blatantly of all.

What Dyer does in his book, and what differentiates it from most discussions of photography I’ve read, is to look at it as a series of narratives in which photographers (knowingly or unknowingly, but mostly the former) converse with one another, constructing as they do so histories of subjects – the chair, the fence, the filling station, the road – that are simultaneously histories of photography and social histories, too.

Some photographers, Dyer suggests, are close to novelists in the narratives the body of their work creates. William Eggleston, for one.

Eggleston’s photographs look like they were taken by a Martian who lost the ticket for his flight home and ended up working at a gun shop in a small town near Memphis. 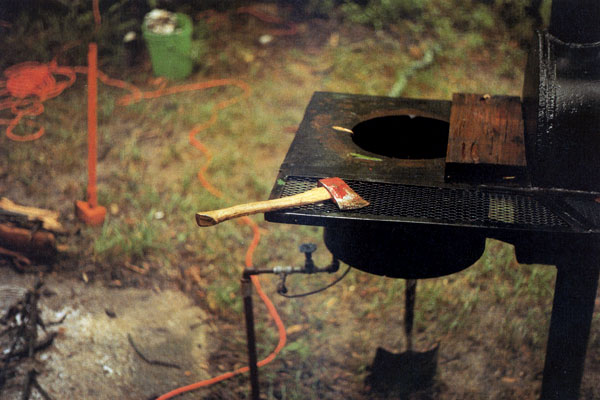 And Eggleston himself has said he regards his photos “as parts of a novel [he’s] doing”.

Dyer makes a comparison between the effect of some of Eggleston’s photographs and the paintings of Edward Hopper, of whom he says:

Hopper could, with some justification, claim to be the most influential American photographer of the twentieth century – even though he didn’t take any photographs.

… tend not to be paintings at all; they are photographs in waiting. They are not only in waiting, they are also of waiting.

That’s why they generate such intense curiosity about what is happening either side of the moment depicted.

As he quotes the poet, Mark Strand, saying …

And Wim Wenders – who knows a thing or two about narrative, to say nothing of photography …

An Edward Hoppper painting is like the opening paragraph of a story. 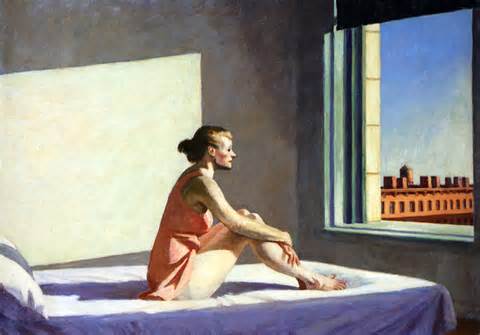 The moment on the cusp of something, some forward movement,  that can, and is, caught in fiction, too. Look at (I mean, of course, literally, read, but given the nature of the piece, the emphasis on light, look seems right) this paragraph from Middlemarch. A Hopper painting, surely, in words. (And, in its final sentence especially, anticipating D H Lawrence, but that’s another discussion, another blog.)

It had taken long for her to come to that question, and there was light piercing into the room. She opened her curtains, and looked out towards the bit of road that lay in view, with fields beyond, outside the entrance-gates. On the road there was a man with a bundle on his back and a woman carrying her baby; in the field she could see figures moving – perhaps the shepherd with his dog. Far off in the bending sky was the pearly light; and she felt the largeness of the world and the manifold wakings of men to labour and endurance. She was part of that involuntary, palpitating life, and could neither look out on it from her luxurious shelter as a mere spectator, nor hide her eyes in selfish complaining.