After a couple of more crowded, slightly hectic sessions, last Friday night at Derby Waterstone’s was a relaxed affair; twenty, twenty-five or so people seated in a curve of chairs three or four rows deep; I’d read a couple of extracts from the new novel, a poem too, taking questions and talking as it went along. How come, one of the men at the back asked, you came to Nottingham, and I explained that having just trained as a teacher, along with some friends I was looking for a cheaper city to live and work in than London. This was back in the mid-60s: some things don’t change all that much. We found somewhere to live in Nottingham, I explained, but not jobs, so we all ended up teaching outside the city. Well, the questioner said, you taught me. Where, I asked, knocked out of my stride. Heanor Aldercar, he said – you taught both of us – indicating the man sitting next to him.

Heanor Aldercar Secondary School, Langley Mill, Notts. I taught there for three years, leaving in the summer of 1967.

I’m struggling a little to come to terms with this while Mel – that’s who they are, Mel and Dave – while Mel is telling everyone of the time I came into their English class with the record player and got them to listen to this new album by the Beatles, Sgt Pepper’s Lonely Hearts Club Band. And now he’s holding up a small square book that I recognise straight off as the City Lights edition of Prevért’s little sequence of poems called Paroles. ‘You gave me this,’ Mel says. ‘Look, your name’s in it.’

When the more formal part of the evening is done with they come over for a chat. As soon as he gets close I can recognise Mel’s boyhood face not quite hidden in the middle-aged one he has now: Mel is Melvyn  Cox – I can’t place Dave, and I apologise for this, but Melvyn, yes. And he’s brought another book with him, Penguin Modern Poets No. 10: The Mersey Sound. You got us all to buy these, you remember? It’s his name he shows me inside the cover this time, along with the date.

We talk for another five or ten minutes, no more: the shop staff are waiting to clear up and I have a train to catch. Time enough to learn that in what they describe as a pretty rough school I did all right – and to learn my nickname at the time – Slim Jim – it could have been a lot worse. I tell them when I’m next reading in the area and Mel says he might just come along. We shake hands and they’re on their way. That book, I think, that little book of poems, he’s kept it forty seven years. I’m moved almost beyond words; moved in a way that, beyond the facts of what’s happened, I’m finding difficult to explain.The shop manageress offers me a glass of wine. And then I’m thinking about it all the way back down to London on the train.

What I was able to do, once home, was dig out some photographs, just a few, of one of the classes I taught at Heanor Aldercar – and, although I can’t be absolutely certain, I think that’s Melvyn Cox in the bottom one, the lad in the back row, sitting up straight and staring straight ahead. 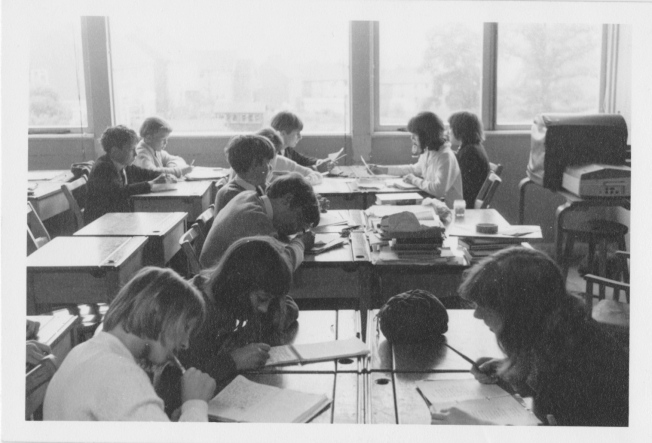 Before writing this post, I dug out a message I had from another former pupil at the same school who contacted me in 2008. I hope he won’t mind me quoting some of what he said :

You turned my life around … At the time we met I was off the rails (but) you put me back on them. Tom Cooke (the headmaster) had me down as a loser which I was before you.  … I am now retired from the Fire Brigade after 34 years, reaching the post of Divisional Officer … As well as teaching me English you believed in me and taught me about social history and so much more. I have a lot to thank you for. Hope you are OK.

One of the particular things he remembered from those English classes was a 19th century folk song, Blackleg Miner, and I’m thinking of the appropriateness that finds that song and its sentiments near the beginning of my working life and how I’m ending another line of work with a book about the Miners’ Strike.

Thinking also that if I were beginning my career as a teacher of English and Drama now I would never have the freedom I had then to choose what we would read and listen to, study and enjoy, and to choose it  a way that merged my students’ developing interests and enthusiasms with my own.