I was fortunate enough to come across the work of the painter Caroline Walker in 2009, shortly after she had finished her post-graduate studies at the Royal College of Art. In amongst all the conceptual artists, video makers and abstractionists, her figurative work, assured and painterly – and consciously looking back, it seemed to me, to the interiors of Sickert and the Camden Town school – made her stand out.

In the relatively short time since then she has progressed to become one of the foremost young figurative painters currently working. In addition to solo shows in New York, Bucharest and Milan, as well as at Marlborough Fine Art in London, she has participated in a number of prestigious group shows, including Some Domestic Incidents, an exhibition of British painting chosen for the Prague Biennale in 2011, and Nightfall: New Tendencies in Figurative Painting which was first shown at the MODEM Centre for Modern and Contemporary Arts, Debrecen, Hungary, before moving to the Galerie Rudolfinum in Prague.

In a recent interview, Walker speaks of being taken by her parents to galleries in Scotland when still a child, and being particularly struck by James Gurthrie’s ‘A Hind’s Daughter’, ostensibly a straightforward rural scene in the 19th century realist manner, showing a girl standing in a field of cabbages, but for, in Caroline’s words, “the knife she’s holding in her hand and the way she’s looking out at the viewer [which] give it a more troubling atmosphere.”

“I think,” she goes on to say, “it’s that quality of making the familiar unfamiliar that I try to create in my own paintings.” And certainly, you can see several of her later preoccupations in this painting: the ambiguity of the central female figure; the relationship between the artist and his/her model; the narrativity that surrounds the moment; the nature of the viewer’s (voyeuristic) look or gaze.

With those burgeoning ideas in mind, it’s not difficult to see how struck she would be by the exhibition of Walter Sickert’s Camden Town Nudes which she visited at the Courtauld Gallery when doing research for her MA at the Royal College, which was based around the female gaze in contemporary painting. 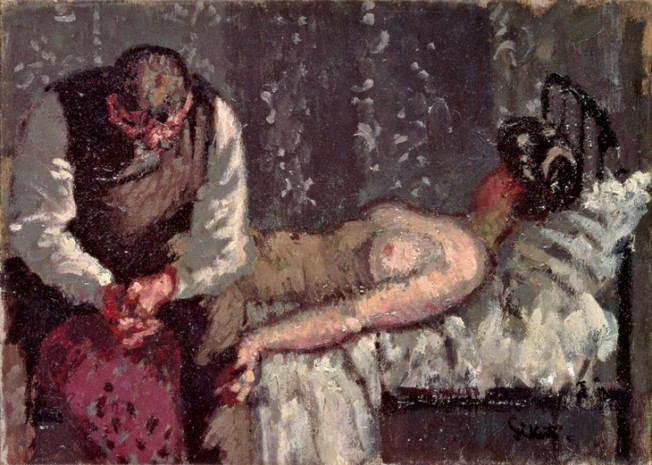 Based around the murder of a prostitute in an impoverished Camden Town bedroom, Sickert’s paintings seem to relish the sexual and narrative ambiguities that Walker’s work would be interested to explore, along with the positioning of the artist towards his model – and his subject. “It made me think,” she said, “about what the relationship between artist and subject meant to a viewer and how it changed our feelings towards an image. Would the paintings still have been so threatening if they had been painted by a woman?”

With their dark interiors and their use of a single, often unclothed model, Walker’s earlier paintings seek to pose (and partly answer) those questions, acknowledging Sickert’s influence while moving towards a style and a way of treating the subject that was increasingly, and recognisably, her own. The narrative and voyeuristic aspects of the paintings take on more and more, it seems to me, aspects of one of her other inspirations, that of cinema – Hitchcock, of course, coming readily to mind.

More recently, as was shown magnificently in a recent show at the PM Gallery in London, In Every Dream Home, Walker has moved quite deliberately from small and confined, dark interiors to larger canvases, shot through with light and colour – open-plan Modernist buildings in which the shimmering surfaces of pools or mirrored glass reflect and refract the images of small groups or pairs of women whose relationship to one another – and to the space they inhabit – is never clear, ever-changing. 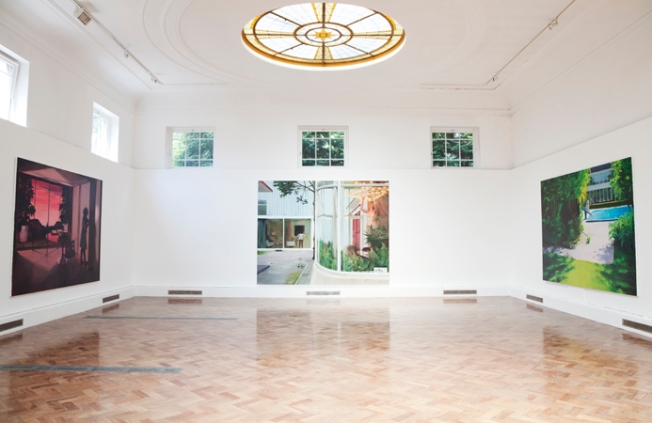 As Walker explains, her working method in these paintings was first to find the right building as a setting, then to source suitable props and costumes, and to hire actors rather than models and ask them to enact certain scenarios which she has storyboarded; she then takes large numbers of photographs on which the final paintings are based. The result is to increase the complexity of the relationships within the paintings, constantly second-footing the viewer and calling his/her understanding into question. 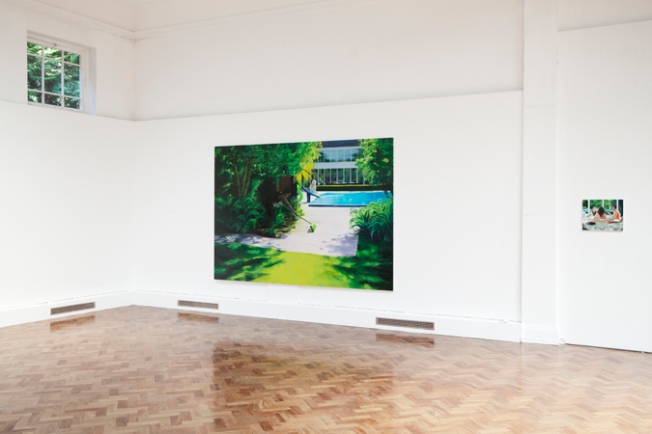 There are moments here when, perhaps inevitably, given the presence of the swimming pools, the Californian canvasses of David Hockney seem to be referenced; others where – in a backward glance to Sickert – the image of two figures laying alone but untouching in an anonymous bedroom, conjures up the loneliness and quiet desperation of Edward Hopper.

With In Every Dream Home, Caroline Walker and the curator, Matt Price, created a – literally – brilliant show in the near-perfect surroundings of the Pitzhanger Gallery, and one can only wait and wonder in expectation of where Walker’s vision will next take her.