I want to say a word to our troops and civilians in Iraq. You’ve performed with incredible skill under demanding circumstances. The turnaround you have made possible in Iraq is a brilliant achievement in American history. And while this war is difficult, it is not endless. And we expect that as conditions on the ground continue to improve, they will permit us to continue the policy of return on success. The day will come when Iraq is a capable partner of the United States. The day will come when Iraq is a stable democracy that helps fight our common enemies and promote our common interests in the Middle East. And when that day arrives, you’ll come home with pride in your success and the gratitude of your whole nation. God bless you.

Each of the chapters in David Finkel’s The Good Soldiers, the account of the fifteen months he spent in Iraq with the 2 – 16 battalion on the outskirts of Baghdad, begins with a quote from the then President of the United States; and, without editorial comment, Finkel shows us, in each chapter,  the changing attitudes and growing incomprehension of the officers and men, their fraying hopes and dogged aspirations, as what is happening on the ground increasingly contrasts with the President’s words. And it only takes a glance in the direction of the evening news to set those remarks into a wider context.

Geoff Dyer said recently that it was non-fiction books that had made the strongest impression upon him of late, rather than fiction. And it’s the case that many of the qualities we expect from fiction – characterisation, narrative development, tension, surprise – the opening up of a world that is both familiar and strange – are here, but with the added knowledge that what we are reading in these pages does not have its wellspring in the writer’s imagination – though there are times when we might wish that were the case – but from his observation. All right, he has made choices, as any writer does, what to report, what to omit, which conversations to include, which to set aside, but the bedrock here is fact rather than fiction and as such, to my reading at least, it hits all the harder.

And what shines through all of Finkel’s writing, alongside a growing bewilderment of the task these men have been set, is his respect for them, no matter what they say or do – no matter how far their views might stray from what we might presume to be his own – and the respect, the love, they have for one another. So, as you read on, each injury becomes an injury shared; each death, lingering or sudden, a loss that is strongly felt. 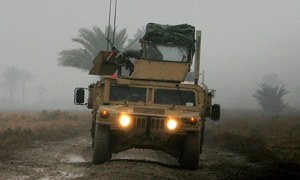 A US Humvee in Iraq. Photo: Jewel Samad